Often confused with D101, Durian IOI has a strong, fruity flavour, and it is almost orange in colour. It is also known as Durian Hajah Hasmah or Durian Mas Muar. This durian is round and greenish brown in colour. The average weight of D168 is 1.5kg.

Easily opened, the flesh of Durian IOI is firm, sweet and creamy. It also has an orange yellow flesh, tasting slightly bitter to some. This durian has been around since 1989, ad it is the most famous durian among the 12 registered durians in Johor. For all the Durian IOI fans, its available for Same Day Durian Delivery @ DurianBear! 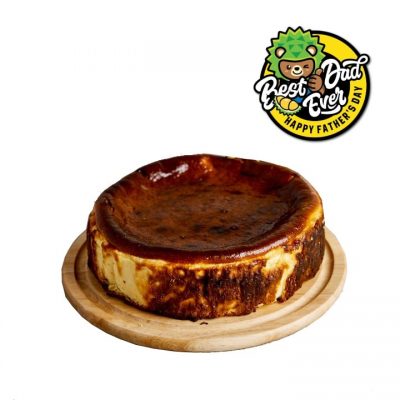 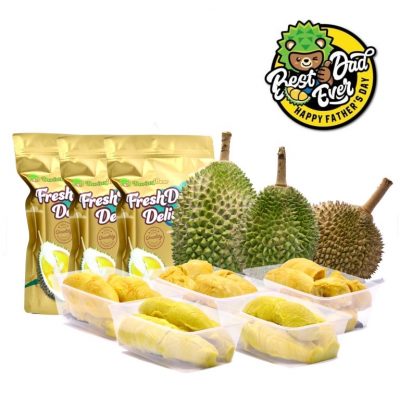 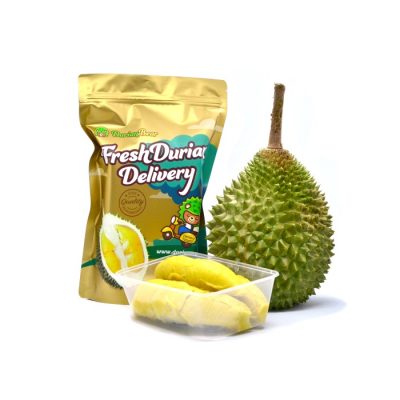 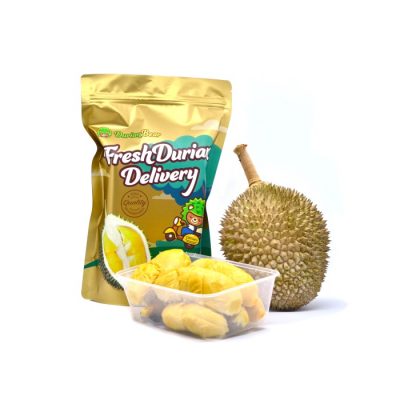 This durian originated from Muar, Johor. The mother tree is located in the yard of Hajah Hasmah Bte Hj Hashim’s house. Despite many people wanting to purchase it, Hajah did not want to sell it, and he only gave it to his neighbours and relatives.

With the twigs that were broken that the neighbour picked up, the neighbour tried to grow the durian tree. Eventually, the tree grew and it had the same appearance and taste as the original one.

This eventually led to Hasmah growing and selling the durians from his yard, which was registered as a superior durian variety with the code D168 on 24 May, 1989.

How to Identify Durian IOI???

Durian IOI is a large and round shaped fruit. The shape of it resembles a slightly elongated ball with its top and bottom being around the same size. It also has a slight depression at the end of the fruit.

The colour of Durian IOI can be confused with many others as it is green and brown in colour, just like most of the durians out there. However, Durian IOI has a slightly lighter shade of green than most durians, which are of a slightly darker brownish green colour. Additionally, the colour is evenly distributed throughout with no obvious patches of a different shade of colour.

It has numerous spikes which are long and spindly. The spikes are also quite close together, leaving minimal space in between each spike, and they are generally quite uniformed throughout the fruit.

One way to differentiate Durian IOI from other durians is its crown. The crown of D168 is ___ and the gap is ___. The spikes will be pointing towards/away from the stem and its crown.

The seam of this durian is not very visible to the eye. If you look at the bottom of the fruit, you will be able to see a deep indention around the size of a ___cents coin. This durian can be easily opened too!

Durian IOI’s stem is very straight, and it is estimated to be around 5cm. The stem is of the same diameter throughout, which makes it one of Durian IOI’s distinct features.

The flesh of Durian IOI is orange yellow, and it is of a medium thick flesh. Upon the first bite into the flesh, you will be able to feel its strong aroma and delicate texture. After that, you will experience a hint of bitterness along with a creamy and sweet taste. Another durian that will let you experience both sweetness and bitterness is Mao Shan Wang, aka, Musang King. Also, the older the tree, the more bittersweet the taste of the flesh will be!

The texture of Durian IOI is also very similar to that of a fully ripe Chanee – slightly fibrous with a thicker skin. The flesh can be quite dry, and can be peeled off easily from the flat seeds. One distinct taste of this durian is that it tastes similar to a candy, which some might not be a fan of.

The season for this durian is around May – July, and this is when batches of aromatic Durian IOI will be available for consumption.

Durian IOI is not the most popular durian in Johor for no reason. Even if you are not a fan of durians that taste sweet, Durian IOI should still be on your must-try list as the sweet durian also comes with a hint of bitterness, which is similar to that of Mao Shan Wang.