The Sultan or D24 durian comes with yellow, thick, firm, smooth, and sweet flesh. The better ones during peak season is normally dry and firm which local call it “Gan Bao”. The awesome taste plus affordable pricing makes it a fierce contender for “The People Choice Award”.

Check Out Durian D24 For Delivery

Although D24 is nicknamed Sultan, the sad thing is we never heard any tales about it. All we know is that it was first introduced in Johor, Pahang, and Cameron Highlands. It was the undisputed Sultan among all durians during the 90s and still command a huge fan base nowadays. The BEST part?? Durian Sultan is available for SAME DAY Durian Delivery now! Durian D24 is normally round in shape. The size is smaller compared to Musang King and it’s almost PERFECTLY round. The bigger D24 is slightly bean shape like.

D24 is normally homogenous green in color. Some D24 durian has slightly brownish green if the durian plantation is situated at the hill. This is due to the weather and soil condition.

The spikes of Sultan durian are more compact and dense. If you notice, the tip of the spike for D24 is a bit curvy and pointy like a hook which can be very painful if you got “stung”.

A quick way to spot D24 is by the crown. The crown is round and the gap is slightly small. The D24 durian has it’s spikes growing inward pointing towards the stem around its crown.

Durian D24 has an easily recognizable seam. If you look closely at the bottom, you’ll see a round shape seam like a size of a 5 cent coin. Often, the spikes of D24 will point towards the seam.

All durian varieties have different lengths of stem, some long, some short. D24 has a relatively short stem in general.

Hmm.. The taste of D24 how would I describe it… The flesh of D24 durian is golden yellowish in colour, quite creamy texture with a strong bittersweet taste. The bonus for D24, some comes with a bit of alcoholic taste. That’s why there is a variation fo D24 called “XO”.

The best part of D24 durian, you can never get enough! For those that wanted to try durian for the first time, you would not go wrong with D24. Craving for durian? Try out our Durian Delivery KL and have a bite today! 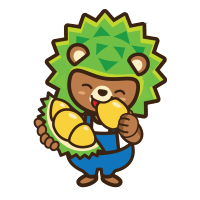 Although the price of durian changes based on supply and demand, the D24 durian price is quite stable at the mid end price point due to its large supply. Most states in Peninsular Malaysia grow this type of durian.

And since we are expecting high yield in the May – August season this year, we expect harga durian D24 turun abit if not maintain its much affordable price range.